The liberation of Eindhoven by the Allies on 18 September 1944. The soldiers were welcomed by the Eindhoven residents with lights behind the windows.  Everyone from young to old is welcome. Primary school children benefit most from the Lichtjesroute. 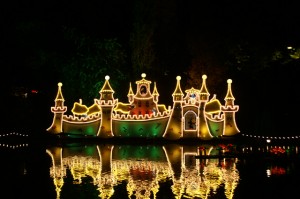 When the light route is organized?

Many parents with school children ask us annually to light the lights during the autumn holidays, in mid-October. We do not do this for three reasons:

When the lamps are lit, many volunteers are tied in during those hours to solve any malfunctions. We can not ask them to be permanently present for another three weeks.
The electricity costs are sponsored by the municipality and the energy company, so extending the burning hours costs them twice as much.
Residents living on the Lichtjesroute, especially on busy days, are bothered by the traffic, we do not want to disturb them for more than four weeks.
Yes, the route is on the public road, so free for everyone to visit.

No, on the contrary you can also follow the route by bike, motorbike, motorcycle and on foot.

The corona virus keeps the world and the Netherlands busy. In our country, the virus is quite violent in North Brabant. In fact, Brabant is the core with the most infections. Reporting follows in rapid succession. Below an overview: Events Events and gatherings of more than 100 people are prohibited. Activities with less than 100 people are also discouraged. With these messages in mind, the pubs in Eindhoven also remained closed last … END_OF_DOCUMENT_TOKEN_TO_BE_REPLACED